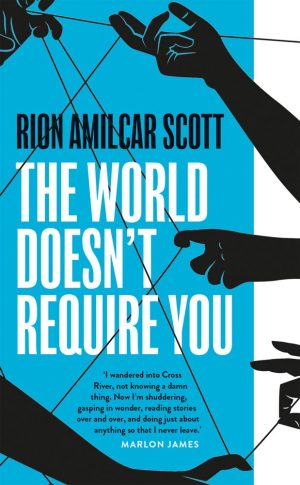 Welcome to Cross River, Maryland, where Rion Amilcar Scott creates a mythical universe peopled by some of the most memorable characters in contemporary American fiction.

A musical and visceral explosion. The book makes you laugh even as it stabs. The truth told in a completely new way. ~ Nana Kwame Adjei-Brenyah, author of Friday Black

This book is so good. Rion Amilcar Scott doesn’t hold back or tiptoe around issues about race. He’s the most courageous writer I know, and this collection is an excellent example and significant achievement. He’s now made his mark as a force to reckon with. ~ Nicole Dennis-Benn, author of Here Comes the Sun and Patsy

Set in the mythical Cross River, Maryland, The World Doesn’t Require You heralds “a major unique literary talent” (Entertainment Weekly). Established by the leaders of America’s only successful slave revolt in the mid-nineteenth century, the town still evokes the rhythms of its founding. With lyrical prose and singular dialect, Rion Amilcar Scott pens a saga that echoes the fables carried down for generations―like the screecher birds who swoop down for their periodic sacrifice, and the water women who lure men to wet death.

Among its residents―wildly spanning decades, perspectives, and species―are David Sherman, a struggling musician who just happens to be God’s last son; Tyrone, a ruthless, yet charismatic Ph.D. candidate, whose dissertation about a childhood game ignites mayhem in the neighboring, once-segregated town of Port Yooga; and Jim, an all-too-obedient robot who obeys his Master. Culminating with an explosive novella, The World Doesn’t Require You is a “leap into a blazing new level of brilliance” (Lauren Groff) that affirms Rion Amilcar Scott as a writer whose storytelling gifts the world very much requires.

The World Doesn’t Require You by Rion Amilcar Scott