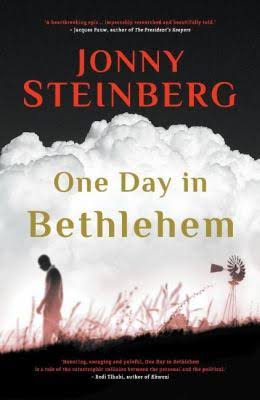 A single moment can change a life forever…

A van full of men armed with AK47s is stopped by two policemen while driving through Bethlehem in the Free State. They open fire on the policemen and, from that moment, their lives are irrevocably changed. So too for Fusi Mofokeng, resident of Bethlehem, who was not at the scene of the crime but was the brother-in-law of one of the perpetrators. He is accused of being an accomplice and tried, sentenced and jailed.

Nineteen years later, in 2011, Fusi is released into a world that has changed beyond recognition, a world in which his mother, father and brother have all died. Throughout his incarceration he fought for his release, appearing before the TRC, and schooling himself in law. Even today, he seeks a presidential pardon.

It is to this life that award-winning author Jonny Steinberg turns his attention in One Day in Bethlehem. In examining the life and struggle of Fusi Mofokeng, Steinberg shines a searing light on the burden of the ‘everyman’ in his quest for justice. In doing so, he also captures a country as it violently sheds the skin of the past to emerge, blinking, into the modern era.