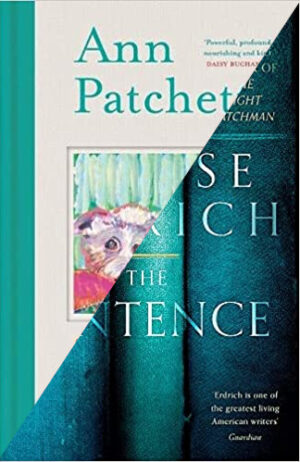 Every now and then I discover books having a conversation with each other.

I loved The Sentence by Pulitzer Prize winning author, Louise Erdrich. I had been on the point of discarding it from my leaning tower of “possible to read on holiday” pile, because it’s billed as a wickedly funny ghost story. I’ve got nothing against wicked humour though I vary rarely find books that are described in such terms actually make me laugh, but I’m not exactly a fan of ghost stories (the world is dark enough ho hum yawn), but the fact that much of the novel is set in an independent bookshop saved it from the holiday chop and that was the best decision I’ve made so far this year.

It’s a beautifully constructed novel which I found to be seriously unfunny, telling in part the story of Tookie, who after serving time for carting a corpse with a whack of cocaine taped to its armpits in a truck to a friend of hers (ok, maybe a little bit funny), finds work in an independent bookshop in Minneapolis. The promised ghost is that of Flora, a seriously annoying customer, who refuses to allow the small matter of her death to come between her and browsing.

Erdrich centres Native American experience and culture in her writing – her wiki entry notes that she “is widely acclaimed as one of the most significant writers of the second wave of the Native American Renaissance” but despite the ghostly themes of trying to deal with traumatic pasts, The Sentence is a fiercely contemporary novel. Tookie’s Minneapoolis is torn apart by the murder of George Floyd while the bookshop is trying to find ways to survive under Covid – and yet Erdrich manages to weave a timeless quality into her storytelling that belies the 2020 environment, and perhaps that is because Erdrich’s love of books and belief in the power of stories shines through the narrative.

It was only after finishing The Sentence, that I discovered (hello google) that Erdrich does in fact own an independent bookshop, that the slightly distant owner of the bookshop in the novel named Louise is in fact her good self. (How the hell did I miss that?)  And to prove that she is as much bookseller as writer, Erdrich includes a long list of books at the end of the novel – some of which are referenced in The Sentence. The eleventh book under the heading, The Sailboat Table (it makes sense once you’ve read The Sentence) is The Dutch House by Ann Patchett, who is quoted on the back cover of The Sentence, proclaiming that Erdrich is her “favourite writer”.

Ann Patchett’s latest book, These Precious Days, is a fine collection of essays that hit these parts in early December. I read some of the essays when it arrived – I had really enjoyed another collection of essays she published a few years ago, and the fact that she is the part owner of an independent bookshop is of course also a pull for me. After reading three or four of the essays, I put it aside, satisfied that I’d read enough to recommend it to customers, moved on to something else with the idea that I would go back to it on holiday in January. And as soon as I finished The Sentence, I returned to These Precious Days.

One of Patchett’s strengths is her ability to write about her friends, her family, herself in engaging and entertaining prose. She is also preoccupied with death, particularly when starting work on a new novel. She obsesses about what will happen to her characters if she dies before finishing their stories – she manages to be both whimsical and unsentimental about her writing, but her prose is permeated by her love of books, her love of writing and the sense of community that is clearly at the heart of her bookselling project. And yes, she too writes about the challenges of keeping her bookshop going under Covid, and it was round about then in my reading of These Precious Days that these two wonderful books started talking to each other.

Their conversation was about the role books play in our lives, about love and respect and caring and humility. And then they talked a little about resilience and the importance of book buying communities and gratitude. There was a lot that I wanted to say, but I took the advice that I long to give to so many – “shut up and listen” and for once, I did the right thing.

The Sentence by Louise Erdrich

These Precious Days by Ann Patchett